Shopping Cart
Your Cart is Empty
Quantity:
Subtotal
Taxes
Shipping
Total
There was an error with PayPalClick here to try again

Thank you for your business!You should be receiving an order confirmation from Paypal shortly.Exit Shopping Cart

Jack's Journey Home: A story of Survival and Perseverance

My husband Jim and I have had Chesapeakes since 1998. To better understand our Jack, I'd like to tell you a little about him leading up to December 27, 2014.

Jack was the 8th puppy of 11 born on May 1, 2002. He stood out from the very beginning, the darkest brown pup in a sea of dead grass and light brown. As we watched them grow, we noticed #8 had a little more "attitude" than the other pups. #8 would come out, be friendly and then he'd disappear. His brothers and sisters found their new homes and Jack had found us.

After a brief stint in the conformation ring, we realized Jack needed more purpose and he was sent off for hunt training. His trainers, Cole Fertig and Jean Bates told us Jack approached learning seriously and loved to work. Jack had found his niche. We ran him in UKC and AKC tests, getting his SHR and JH with 4 straight passes in each test. He earned his ACC WDX at the ACC National Specialty Show in Ohio.

Jack was Jim's buddy, they were always together. They would go quail hunting at local preserves, but never duck hunting. This is Florida and I'm afraid of Gators in the fresh water here. So, I'd put my foot down and Jack would stay home. For several years, Jim and our good friend, Rich Scheffer talked about taking Jack duck hunting. Rich knows the Okeechobee area of Florida very well and hunted there safely with his Chessie, Diesel. Jack wasn't getting any younger and Jim wanted to give him the opportunity to go on a "real" duck hunt. So, they planned this for December 27, 2014. Jack was now 12 1/2 years old and it had been about 3 years since he was around gunfire.

December 27th was a beautiful mild day. Jim and Rich put the boat in at a marina on the Kissimmee River. With Jack in the bow, they headed towards the swampy area called "The Mounds". Jack was having a good time basking in the warm Florida sun. They settled in the marshes when Rich spotted a duck and took his shot. Startled by the unexpected gunfire, Jack took off into the dense mounds of cat tails. He was in the Fright and Flight mode and didn't respond to Jim's calls and whistles. They tried following but the boat couldn't go into that area. So Jim and Rich jumped into the water. The roots underwater pulled Jim under and when he surfaced, Jack had disappeared. They searched the area until they ran out of daylight and gas. Devastated, they returned to the marina and Jim had the difficult task of telling me that Jack was lost.

For the next few days we had airboats going out to the area. We distributed flyers everywhere. We had adds in the local newspapers, on the local radio station and visited shelters. Jack's plight was posted on social media in hopes someone had been out there hunting and had taken him in. A dear friend and fellow Chessie person, Mclane Evans, who is a trained wildlife surveyor, had hired a plane to search the area. There was no sign of Jack, nothing. We were beginning to lose all hope of ever seeing him again.

On the evening of the 4th day, feeling desperate, I called an animal communicator, Jacque Riker. I was skeptical about her abilities but felt I had nothing to loose by talking to her. So I told her things about Jack, how he became lost and sent her a picture. The next morning, New Year's Eve, Jacque called to let us know she had reached out to Jack, that he was alive, but scared, he was stuck and couldn't move. She told him to make himself heard, that there were people out looking for him, that he should not give up. After Jacque told me this and I hung the phone up, I asked myself, should I believe this?

Well about 5 minutes later I had my answer. Jason the air-boat guide called to tell us his friend Bob Stafford had found Jack!! While setting out duck decoys, Bob had heard a dog barkineg. Following the sound, he found Jack about 100 yards from where he was lost. His rear legs were tangled in the vines and underwater roots and he couldn't free himself. Bob had to cut Jack free. He told us where he was taking Jack and we rushed the 100 miles to get him. With the help of some wonderful local folks, we took Jack to Dr. Harvey a local vet. Jack was suffering from dehydration and hypothermia and was in shock. Dr. Harvey said it would be touch and go and he didn't give us much hope. Jack was given IV fluids, and put on a warming blanket. That was all they could do, the rest was up to Jack. By the next day, he was awake and that afternoon he was wagging his tail and was able to walk outside. After spending two nights under the constant care of Dr.Harvey and his tech Megan, Jack was able to come home.

Jack has had a few setbacks, but he is steadily improving. He has the perseverance and the will to survive for which this breed is known, as well as the bond of love he has for us, his family. We are eternally grateful to everyone for their prayers and well wishes that Jack received and is continuing to get. The Chesapeake and dog family is truly amazing, Words cannot express how we feel. God Bless you all for bringing Jack back to us. 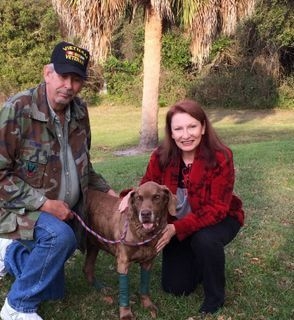 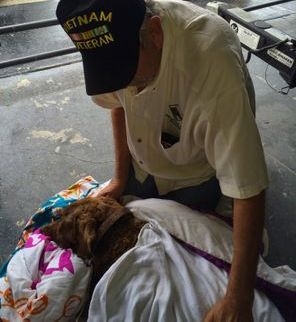 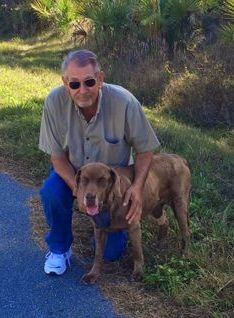